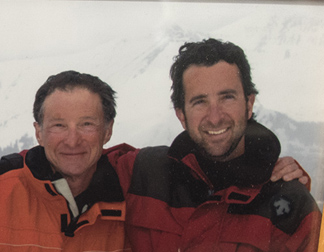 For Cary and Marsha Cooper, healing from the loss of their son, Glenn, has meant focusing on the exuberant and vital life he lived instead of the way in which he died at age 44. Each year, on the anniversary of his suicide, they walk to a beloved spot on the Sallie Barber trail. It’s a place they’ve hiked to countless times during their twenty years in Breckenridge, sometimes with him by their side. They feel his spirit here, and they spend time reflecting on the generous life he lived and the countless moments of joy they shared. They think about how much they loved him, and how much they miss him. And then, they try to move on.

“I do not think I will ever heal, if healing means not having moments of great sadness and feelings of great loss,” says Cary. “If healing means not letting Glenn’s suicide destroy the wonderful life that Marsha and I have together, then I’ve been healed from the moment we realized we had suffered a terrible tragedy –– and that it could ruin our life if we let it. We vowed not to let that happen to us. Doing so would not be fair to our daughter, to our grandchildren, or to the life that Glenn lived.”

In the days following Glenn’s death, Marsha often went to a spin class in Santa Monica, where Glenn lived with his family.  It was a class she’d occasionally taken together with Glenn; revisiting it daily the first few weeks after his death helped her find release and a sense of his presence.  Often, she felt him waiting for her at the top of a big hill, encouraging her to reach the top and join him.

Three weeks after his death, this vision suddenly changed: Glenn was standing at the beginning of the climb instead of the summit, hands in his pockets. Marsha looked back several times at him as she was climbing; he didn’t move. The last time she looked back, he took his hands out of his pockets, blew her a kiss and waved goodbye. Crying, Marsha climbed the rest of the long difficult hill on her own.

“The image of that ride, on the morning of my 70th birthday, is a powerful and meaningful metaphor for me,” she wrote in a letter to family and friends later that day. “I see it as the beginning of my letting go of Glenn and moving on. Perhaps that was his birthday gift to me. I like to think so.”

Cary and Marsha both recognized the importance of finding healthy ways to move through their intense grief early on; the process has been a unique journey for each. As it is for so many survivors of a family member’s suicide, their grief is also complicated by the unanswered questions left behind.

“Glenn loved life and lived it fully,” says Marsha. Over and over again, eulogies from his memorial attested to this vitality, as well as to his intelligence, his sense of fun, his big heart and deep generosity. They shared memories of the many weekends the family spent at Lake Arrowhead in California, where Glenn was the leader of countless spirited adventures. Childhood friends whom Glenn retained for life shared stories of the sleepovers, the close multi-family gatherings, the college parties at the University of Pennsylvania, where Glenn graduated Magna Cum Laude with dual degrees from the respected Wharton School in 1990.

Many also shared memories of Glenn as an adult, deeply in love with his wife and the father of two-beloved daughters; they remembered Glenn as the beloved honorary uncle to the children of countless friends, and the ever-steady rock to friend’s battling their own struggles.

“For so many of us, you’ve been an anchor,” wrote one close friend. “That I, that we all, weren’t able to anchor you in the end, fills me with unspeakable sadness.”

THE CHALLENGE OF ILLNESS

Amid the many stories sharing Glenn’s vital spark, several also shared a glimpse of the occasional struggles he experienced, which he talked about openly. As an adult, he had several depressive episodes, the first in response to an investment reversal in the early 2000’s and another several years later. During each, he had readily acknowledged his need for help, connected with a therapist and got on medication that stabilized his depression within a year.

In large part, this openness is why his suicide was incomprehensible to his family and friends. Glenn left no note explaining his decision. He’d spoken to his wife on the phone shortly before taking his life; there was no indication he was in distress. After his death, Cary thought back through conversations they had in the months preceding his suicide and wonders if there may have been intimations. And though he possesses deep awareness that his son’s death was the tragic end result of an illness he couldn’t control, he still struggles to let go of a sense that he could have done something to prevent it.

“Nothing has ever made me humbler as a parent,” says Cary. “I always thought Marsha and I were as good parents as we could possibly be, and the lives our children led supported that proposition. Glenn’s suicide changed the way I felt, which makes me believe at some level that his suicide reflected a weakness in him –– or in me as a parent.”

Marsha feels Glenn’s decision likely resulted from the unfortunate timing of concurrent events. Though his business was growing, he experienced times of stress, became symptomatic, and reached out for professional help. However, at the time of his latest episode, Glenn’s calls went unanswered. His psychiatrist had died, and he wasn’t notified. His family MD renewed the past prescription and approved an increased dosage. Marsha wonders if, in combination with his significant stress, the drug may have created a psychotic event and been a factor in his decision to take his life.

Cary and Marsha spent a month in Los Angeles with family after Glenn’s memorial. They had raised Glenn and his sister Erin there, and also spent their entire professional lives there –– Cary as a partner in a law firm and Marsha as an educator –– prior to retiring in Breckenridge in 1996. When they returned home to Summit County, they decided to hold an open house for their circle of Colorado friends.

“It was a conscious decision,” says Marsha. “We wanted to re-enter our community and our lives smoothly and worried that seeing friends and acquaintances individually over a long period of time could be painful. The gathering was difficult, but it was also warm and loving and made our return home easier.”

At their home in Breckenridge, the Cooper’s keep a treasured hardcover book they’ve called “On The Road.” The book is a compilation of letters Cary wrote home to family during a five-month road trip the family took in 1979 across the U.S. in a converted Dodge van. They followed that trip with a second six-month sabbatical around the world several years later. Among the cherished memories Cary keeps on his desk are two photos of himself with Glenn, one from this second trip and one from Telluride, where Glenn spent a year as a ski bum after college. The photos are “A reminder of how much we loved each other, how many very good times we had with each other and how lucky I was to have him in my life,” says Cary. “I miss his presence. I spoke to him everyday. I loved him being my best friend. I miss watching him interact with his daughters; I miss seeing his obvious pride in them. I miss seeing him enjoy his life …. Living life as we did before Glenn’s suicide is what has enabled me to continue to be the person I was before his death.”

“Life is fragile, and I now know it is also unpredictable,” says Marsha. “Glenn’s death has underscored a core belief of mine that we are able to overcome most all of what life throws in our paths by acknowledging it, accepting it, feeling it and knowing we will, with time, feel the warmth of the sun and another beautiful day.”

This optimism of Marsha’s is a characteristic their son knew well. In a letter Marsha and Cary sent to family and friends a year after his death, they wrote:

“We can hear Glenn now, teasing Marsha for always looking for the positive in everything. ‘Unbelievable, Mom!’ he would say. Yes, perhaps unbelievable, but this is what we found, and it gives us peace.”

"Everything that is done in the world is done by hope."

"No matter how dark the moment, love and hope are always possible"

"I have always believed that hope is the stubborn thing inside of us that insists that despite all evidence to the contrary, something better awaits us"

" Hope is the thing with feathers that perches in the soul and sings the tune without the words, and never stops at all."

"When you walk to the edge of all the light you have and take that first step into the darkness of the unknown, you must believe that one of two things will happen, there will be something solid for you to stand upon, or you will be given wings to fly."

"The biggest lie to buy into is to think that you’re alone... You’re not. Hope is always closer than you know. You’re more loved than you feel. And you’re stronger than you realize."

"Small acts, when multiplied by millons of people, can transform the world."

"Ah, kindness, what a simple way to tell another struggling soul that there is love to be found in this world."

"I realized that there are a lot of other people out there who can relate to what I’ve been though. So I’ve become more comfortable with sharing some of my story and letting people know that I have been through hardship too."

"I struggle, but I continue to choose the high road. When I share I feel a little bit lighter because I’m being honest with myself."

"Life is fragile and I now know it is also unpredictable. Glenn’s death has underscored a core belief of mine that we are able to overcome most all of what life throws in our paths by acknowledging it, accepting it, feeling it and knowing that we will, with time, feel the warmth of the sun and another beautiful day."

"I think the point of ‘normalizing’ it (mental health) is that many many others feel that shadow so we shouldn’t be afraid to talk about it. It doesn’t mean that myself or anyone else suffering has done something wrong. It just is."

"Nothing missed and no regrets. Live on in peace, health and happiness. Look for meaning where you can and cherish the mystery when you can’t."

"I have come to terms with the diagnosis and don’t let it affect my self-worth. Its not any different than any other illness that can cause a chemical imbalance such as high blood pressure or diabetes. When it’s our brain, it's just a little harder to understand."

"There is help out there – you just need to ask for help first and truly seek and accept the help that is offered, even if you don’t really understand how you are going to get better. But have the faith that you will."

This is not a site for personal disclosure of suicidal thoughts or behaviors. If you are in crisis, please call 911 or call CO crisis Services at 844-493-8255, or go to your nearest emergency department for assistance.