From Success to Happiness 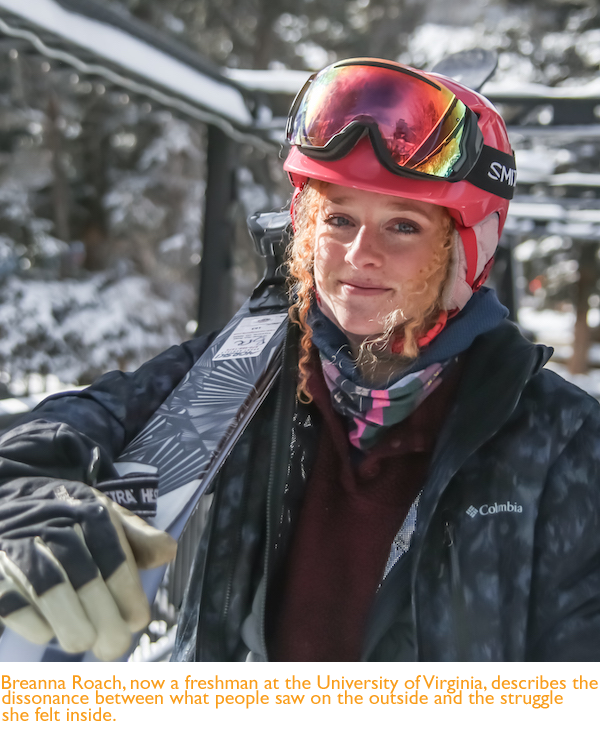 You’d be hard-pressed to find someone more poised for success than 18-year-old Breanna Roach. The 2020 Summit County High School honors graduate, who now wears the orange and blue as a “Wahoo” at the University of Virginia, met me at my kitchen table in early June to talk about her emotional journey from Summit County, Colorado to Charlottesville, Virginia.

“I think high school is a hard time for a lot of students and a lot of us simply struggle through mental health challenges,” she says early on in our discussion. “For many of us, people see happiness defined as success in academics, sports, friendships, extra-curricular achievement, but happiness isn’t always what we feel inside. In high school I learned a lot about the mismatch between public and personal perception. It led me to a lot of bad days and a lot of good days; both were important to my growth, and without both I wouldn’t be where I am today.”

Covering a lot of ground in those two hours, Breanna occasionally twirls the copper colored strands of her curly mane that frame a pretty face dotted with freckles. Her blue eyes are bright and honest, steady and deep. When she speaks, it’s with precision, as if she’s spent a great deal of time kneading her thoughts.

In my short time with her I was struck by how someone so young could identify and appreciate the process of darkness yielding to light, of being patient and present to feel heaviness lift, of making sense of turmoil. Yes, Breanna Roach is in a very good place, indeed; accepting a scholarship to a premiere east-coast university, declaring nursing as an early major, loving the freedom of pre-college summer in a beautiful mountain town, life is good for her these days. And she’s learned that it’s going to take struggle, strength, courage and hope for those good days to continue.

A native of Summit County, Breanna grew up enjoying the bounties of outdoor sports and recreational activities. “I had a typical Summit County childhood,” she says. “You go to school, you get close to your classmates, you ski with your families on weekends. It was a good time.”

She attended Frisco Elementary, Summit Middle School and Summit High School. A goal-oriented, self-starter, she excelled academically in the high school’s International Baccalaureate Program; and in sports, becoming captain of the Varsity soccer team as a junior, playing basketball, was a member of the ski team. She had many close friends and participated actively in myriad clubs and as a camp counselor.

As she distills her accomplishments, she admits success had its costs: “From an outside perspective, I looked like I was happy and successful, so there was nothing to worry about. People measure your success based on school performance, extra-curricular, social life, — check, check, check. I had all those things and I was doing well in all those things. So they identified me as being successful, and they assumed I must be happy, right?” More on this later.

Breanna and her sister Ashley are fraternal twins and differ in both temperament and looks. “She’s tall, blonde, tan,” she says. “You’d never guess we were sisters, let alone twins. We weren‘t close as kids but as we grow older, we’re getting closer.”

Her mother manages a retail shop in Keystone; her father is a self-employed computer programmer. When she talks about her relationship with her family, she layers it with insight about what makes Summit County different from other places when it comes to rearing children. “Summit County people – as a stereotype – like to party, have fun,” she explains. “My parents are no exception. They like to ski, camp, run rivers, party; It’s all about having fun, continuing that Summit County vibe.”

She concedes that it had to have taken a lot more work than fun for her parents to be able to send her and her sister to college, for which she’s extremely grateful, but she says, “It’s just the Summit County way; all of our role models and adult mentors came here because they liked to ski and have fun, so for a lot of us it’s normalized to have adults in our lives who like to party, that’s just how it is.

“With my life being so busy and their lives the same way, we bonded over the activities we had in common but didn’t necessarily make time to have open conversations or get to know each other outside of those common activities. My parents and I bonded around skiing, but at times it felt like they didn’t know me all that well.”

Breanna doesn’t know the answer to the chicken and the egg question: Did she develop extraordinarily strong relationships with friends because she lacked one with her parents? Or did she not develop a deeper relationship with her parents because her emotional needs were being met by her friends?


“I just know that my social life and my family life were very separate,” she says. “Not having a close relationship with my parents was not a problem for me because I had a really good support system of friends, teachers and mentors; and to be fair, I was coexisting with my parents fine. We were a functional family unit who loved each other.”

Toward the end of high school, with all the activities and the expectations to excel, Breanna yearned for more breadth and depth in her relationship with her parents. “I didn’t know how to start a conversation with them because I had never really talked to them about any big stuff. It didn’t really strike me that I should talk to them or even how.

“I just turned toward my friends and other groups. For a while I internalized a lot of stuff, but in junior year I made a lot of new friends and met new people I could talk to and was really open with them, so that really helped a lot.”

It was in her junior year when things got both better and worse for Breanna, with those good and bad days she talked about earlier. She was one of 40 students admitted into the International Baccalaureate Diploma Program at Summit High School. It’s a “demanding two-year curriculum that meets the needs of highly motivated students and leads to a qualification that is recognized by leading universities around the world,” according to the district website.

The IB Program includes intense, advanced college-level classes, exams that determine college-level credit, multiple essays, an extended essay, seven requirements for each class, among other demands. “I was stretched thin, playing Varsity soccer, playing basketball, hours of homework after school and a lot of sleep deprivation.” Averaging about four hours/night of sleep, Breanna remembers that “it was kind of cool when you’re on the teacher’s assignment documents at 2:30am and you see seven of your classmates are also doing the work at the same time. It was a tight community. We all knew what we were getting into; it’s not like we weren’t warned about how hard this was going to be.”

Some of the students who didn’t have extra-curriculars were able to do it all a little more easily, but it’s frowned upon, she says, because “you need extra-curriculars to be ‘balanced.’” She uses the word with emphasis to underscore the irony.

“I made the decision not to do my extended essay (a requirement for the IB Diploma) in May of junior year and it was due February of senior year. “For me I knew that not completing the essay was the right thing to do. I didn’t share the decision widely because I was embarrassed. I had failed my goal of getting the IB diploma just half-way into it; there was this heavy sense of failure. And it wasn’t like a relief to let that go because I kept pretending I was doing it. It was just something that had to happen.”

It was during this time that positive coping mechanisms weren’t relieving Breanna’s exhaustion and sadness, so she turned to negative ones, including self-harm, a practice that 13-23 percent of teenagers engage in. Self-harm could include cutting, drinking too much, binge eating, getting high; they’re a way to feel something other than what you’re feeling.

It was another irony to Breanna that, even being trained and equipped to help others on their mental health journeys, she faltered with her own. “I was very educated on mental health. I went through peer counseling; I was a peer counselor to middle schoolers. I was aware of how common self-harm and depression were among my peers; I’d always been the person who helped. It was weird. I was still fulfilling that role of talking to people who were struggling while I was going through all this. I know what mental health advice I would give to someone who was going through what I was going through, but I couldn’t take the advice myself. I tried hard, but I couldn’t counsel myself.”

“Therapy was one of the most positively impactful things I’ve ever done. It gave me strategies — like being more mindful of
little things or rearranging my language to be more positive. It gave me an outlet to communicate and find solutions;
it expanded my support system. I’m still in touch with my therapist.”
– Breanna Roach

After sharing some of her struggles with her mentor, she decided to see a private therapist in November of her senior year. “Therapy was one of the most positively impactful things I’ve ever done. It gave me strategies — like being more mindful of little things or rearranging my language to be more positive. It gave me an outlet to communicate and find solutions; it expanded my support system. I’m still in touch with my therapist,” she says. “I was at the point when I wanted to address the problems, and I had given myself time to think about them and I had practiced talking about them with friends. A couple of years earlier I would not have been able to identify my problems to a therapist.” 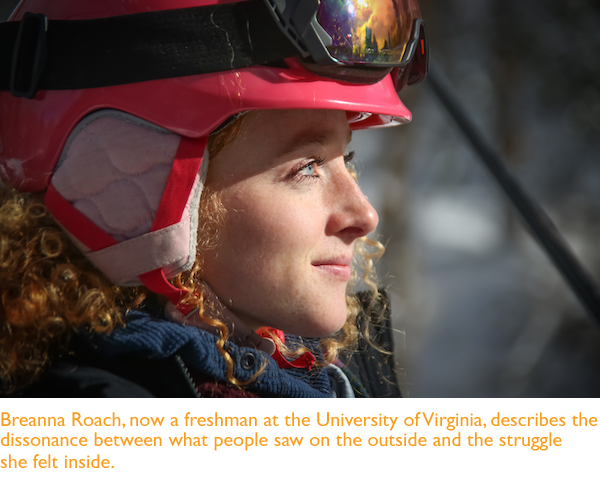 She says that seeing a therapist gave her insight into the expectations and different ways people show love to one another. “My therapist helped me realize that my parents were doing everything they were doing because they cared about me and wanted what was best for me. That was helpful.”

Her therapist also helped her become more aware of the dangers of negative coping mechanisms, as well as the efficacy of positive ones. “I got into meditating, breathing patterns, physical activities, journaling, talking with friends — things that were not harmful to turn to. Eventually, the cycle broke.”

“On a biological basis, young brains form habits really quickly,” she continues. “That’s why self-harm or substance use can be hard to let go of when you start young. Our brains are meant to learn, so they shape neuropathways quickly and easily. They’re also able to relearn new behaviors, so when you redirect your thoughts, new and more positive pathways can be created.”

If it sounds as if she knows a lot about this stuff, she does. As part of the Youth Empowerment Society of Summit (YESS), Breanna and other club members created the Youth Tobacco Coalition, and advocated successfully, through data, research and testimony, for increased regulations and taxes on tobacco products in Summit County. Those went into effect in 2020.

Story by Suzanne Acker, special projects writer for Building Hope Summit County. If you have a story to share, reach out to her at suzanne@buildinghopesummit.org.
Photos by Byron Swezy / @dragonfruitvideo
Video by @dragonfruitvideo