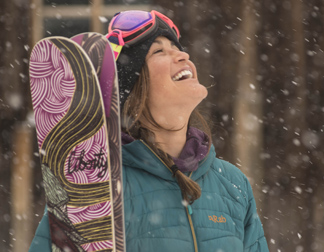 Emily Steingart appears to be living an idyllic mountain-town life. In between juggling several side gigs in marketing and communications, she’s busy co-launching a new yoga retreat business called GOYO Adventures. Last summer, she worked as a production assistant for an Aspen photo shoot for Fabletics, an active-wear clothing line founded by Kate Hudson. Her Instagram feed is a catalog of enviable adventures: she’s converted her old Toyota Tacoma into a camping and road-trip-ready truck and, like generations of adventurous young Summit County women before her, she takes off in it regularly to ride the singletrack in Salida and to cling at crimpy holds on the limestone cliffs at Shelf Road. She skins up Baldy several times a week in winter with her exuberant shelter mutt, Yoda, and a cadre of friends. Several times a year, she packs a Dakine roller bag and pulls out her well-worn passport to teach yoga retreats at hip, sleepy beach towns in Costa Rica, Mexico, Peru, Nicaragua and Haiti.

Among the long, happy Instagram feed, though, one photo stands out in stark contrast: a quiet image of eight balloons lifting into a dark blue sky at Massachusetts Skaket Beach. Accompanying the photo is a bittersweet and enigmatic caption: “I walk down memory lane because I love bumping into you…A special birthday celebration. You’re my shooting star, MSS.”

Within that moody image lie the origins of Emily’s long journey through grief – a journey that ultimately brought her to the Summit County lifestyle ­she lives now. “MSS” refers to Emily’s beloved older brother Mike. Each year, on his birthday, her family reunites at a Cape Cod beach and releases balloons in the air. Mike isn’t with them. He died 11 years ago, on December 11, 2005, as the result of an accidental overdose .

The Steingart family grew up in a small, idyllic New England town. Emily’s father, a physician, and her mother, a former preschool teacher and active community volunteer, have been married for 44 years and still live in the same home Emily, Mike and their older sister grew up in. The family was –– and remains –– very close. Photo after photo in a small memorial album Emily keeps by her bedside show them sharing joyful times together. In one, Mike buries a laughing Emily in the sand of a beach in the Outer Banks; in another, the two lean deeply into each other, connecting; the bond they share is obvious and deep.

The Steingart children have always been active. Mike loved skiing, hockey, mountain biking and the Red Sox. He attended Suffield Academy, a prestigious boarding school in Connecticut, and continued on a successful academic path in college at Bentley University, where he earned a business degree and made the Dean’s List. He was also engaged in his community, raising money for MS with Team in Training.

Not unlike the experiences of so many others from loving, supportive families who’ve fallen prey to drug abuse, Mike’s journey highlights the way addiction can subtly sneak in and begin to erode a life.

“He was usually very upbeat and had great friends and successes,” says Steingart. “He had a girlfriend of eight years who is the sweetest person you would ever meet. But, he also suffered from Tourette’s his entire life. He had a mild tic. It was just a facial tic, but it caused him a lot of discomfort and a lot of stress. Trying to look ‘normal’ and not tic was exhausting. And that was something that he always struggled with emotionally: just feeling different than everyone else.”

Emily thinks this may have been what started Mike down the path toward a troubling use of drugs. After experiencing some depressive episodes, he began working with a psychologist and spent some time in the hospital during one dark low. Emily feels that prescription painkillers offered her brother a way to numb the lifelong discomfort and pain he felt from being different. After college, he started hanging out with a crowd that used lots of them. “He was experimenting, like so many of us,” says Emily. “But his situation was different, because he was on these other meds (for Tourette’s and depression).  I think he experimented with drugs and didn’t really know the limits.”

Knowing when to intervene was a challenge for the Steingarts, as it is for many families who sense a family member is using and struggling.

“It was hidden,” says Emily. “I think that’s what was the hardest part for us. Because it was hidden, my parents didn’t really know the extent of it. To this day, my sister and I ask: ‘Was he doing this? Was he doing that?’ We just don’t know.”

What they do know is that he was doing prescription drugs, including Percocet. One night, the Percocet, his antidepressants, and sleeping pills he took for his Tourette’s interacted negatively, and he became unconscious and aspirated. Their parents had been away for the weekend on a business trip; they found him on the floor at the house when they returned home.

“The day that he passed is still completely vivid in my mind,” says Emily.  “I remember exactly where I was, and who I was with.” Emily and her sister were two hours away in Boston when they heard the news from their parents; they began heading home immediately with their boyfriends in separate cars. “We were so mentally out of it,” says Emily, “that my sister, who was driving behind me, rear-ended me on the way home.”

Emily was 20 years old at the time of her brother’s overdose, and his loss affected her profoundly. She finished her undergraduate degree, worked in Boston for a year, then moved to Denver for graduate school. Seeking purpose and meaning, she travelled to Haiti on a post-earthquake medical mission trip. She also pursued yoga, ultimately earning a specialized training called TIMBo (Trauma Informed Mind body) through YogaHOPE. TIMBo uses yoga and mindfulness training to reprogram the body’s conditioned responses to long-term trauma incurred by grief, addiction, conflict, abuse and natural disasters. The TIMBo training was deeply healing, offering her a way to begin to move through the loss of her brother in a powerful way. She became impassioned to share her knowledge with others, including returning with YogaHOPE to Haiti. She also came to realize the power of sharing and honesty in supportive contexts, recognizing the value of sharing to heal instead of cover deep wounds.

“I realized that there are a lot of other people out there who can relate to what I’ve been through,” she says. “So I’ve become more comfortable with sharing some of my story and letting people know that I have been through hardship too. I struggle, but I continue to choose the high road. When I share, I feel a little bit lighter, because I’m being honest with myself.”

For Emily, one thing that remains troubling is feeling that the healing she’s gained through yoga and mindfulness training might have been able to help her brother journey through the emotional pain and isolation he felt in life.

“I wish some of these practices had been more accessible back then,” she says. “There are proven studies that acupuncture can help Tourette’s and minimize tics, and relax your muscles; the same is true with yoga. Mike would of been open to those things, but none of us were really knowledgeable about any of them back then. So we just moved right to (conventional) pills.

“Yoga and meditation also teach you to meet yourself where you are at. That you’ll move through painful things, and you’ll grow. But a support system is extremely important as you’re moving through that healing process. It’s important not to rely on yourself for all of those answers.

“I miss him often, but over time I have learned to be able to sit with the discomfort rather than run from it,” says Emily. “To this day, my sister still asks is: “Do you still believe that he’s in a better place?’ And I truly do. Because I think his life was extremely challenging for him. I think he was in pain

–– emotional and physical –– even though he knew he was truly loved by so many people. That doesn’t change the fact that I wish he was still around every day; that I wish he was going to see me get married one day, and see my (future) children. But it does bring a sense of peace.”