Order, Disorder, and Reorder:
A Journey through Anxiety and Identity 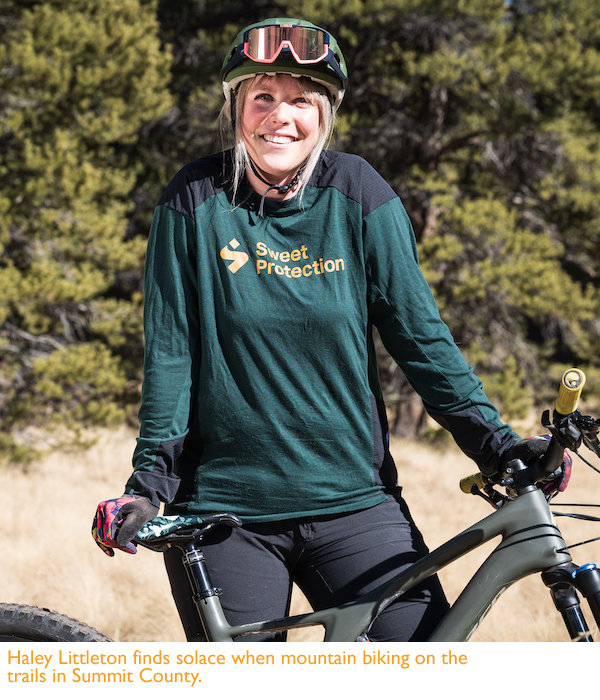 Haley Littleton describes the anxiety that has nipped at her heels her whole life. “I would describe it as a low hum that always existed in the back of my head,” she says, “full-of-mind chatter like, ‘you’re not doing enough, you’re not good enough, you need to be better, or you need to work harder.’ Control was always a big thing for me, and oh, the catastrophizing!” she slaps the table for emphasis. “Let me plan out the worst possible scenario that can happen so that I won’t be hurt by it.”

On a classic mountain bluebird day in early June at an outdoor Frisco coffee shop, 29-year-old Littleton, who runs communications and marketing for the Town of Breckenridge, seems as far from hurt as she is from her hometown of Greenville, South Carolina. She’s friendly, smart, pretty, funny, animated — someone who appears entirely comfortable with herself and others, making her struggles with anxiety seem incongruous. While awaiting the Black Lives Matter protest, in which she actively participates, Littleton shares about her life, and the assorted components she has assembled to help her both heal and thrive.

In 2016, after being in school without a break since kindergarten, Haley Littleton picked up her Master’s Degree in English Literature from the University of Denver and headed for the mountains. “I had friends up here and I thought it sounded good to finally take a break, figure out what I wanted to do. I moved to Keystone to be a ski instructor. My parents admittedly thought, ‘you just got a master’s degree in English and you want to do what?’ I assured them that I had some form of a plan.”

At the end of the season, she started applying for jobs and in a ‘right time/right place’ scenario, got the job with the Town of Breckenridge managing communications and marketing. “It’s a great blend of everything I’m interested in: editing and writing, politics and communication, outdoor industry and environment. “People always ribbed me about getting a Master’s in English, like, ‘what are you going to do with that? But I always joked that most people hate writing and public speaking so someone will eventually pay you to do it,” she laughs.

Littleton was raised an Evangelical Christian in the Bible Belt – church every Sunday, Wednesday and Saturday. “I grew up in a very ordered, black and white idea of conservative Christianity,” she explains. “Very much a ‘do this don’t do that’ behavior system. When I was young, the order suited me well, and I remember thinking, ‘I’m going to be the best Christian you’ve ever seen,” she says. Her father is an operations partner at a private equity firm and her mother is an accountant, both of whom “are incredible, kind and loving, and did their best,” she says. “But no kid escapes childhood without some kind of wound.”

She has a brother, Wesley, who was adopted from Russia when Littleton was five years old and, as a child, especially struggled. When they were young, Littleton says Wesley had frequent tantrums, and the family naturally focused energy in his direction. “As a kid I thought, ‘I’ll take care of myself, I won’t be a burden. I’ll do everything I’m supposed to do.’ I took the mentality of ‘I’m fine, you both focus on him, and I’ll just excel and perform to make you proud.’ My parents wanted me to be the best I could be.” The mindset was definitely that “Haley’s fine.”

She was an anxious and cautious child, a condition that intensified in third grade with 9/11 – a formative childhood event that got her thinking: “You mean my mom and dad could go someplace and not come back?” She had frequent panic attacks accompanied by difficulty breathing. And sleep? Forget it. “My dad used to spend the evenings trying to soothe me before bedtime to ward away the nightmares, which were terrible. I’d walk and talk in my sleep. To this day, friends who had sleepovers with me tell all kinds of terrifying and funny stories,” she laughs.

She says her parents thought this was all natural and normal nervous energy, but Littleton now knows that she had generalized anxiety disorder and a hyper-vigilance around safety. Her coping mechanisms were to work harder, be successful, achieve more. “I misinterpreted that nervous energy as ambition, when it was just anxiety.

“Growing up in an Evangelical culture, I thought religion was the pursuit of perfection. I internalized that; my personality was shaped by earning validation and being the best student, the best Christian, the best captain of the basketball team, and always trying to fit more and more in.” The more success only intensified the pressure she’d put on herself.

She began focusing on her mental health in May 2018 after a particularly bad romantic relationship, seeing a therapist, getting into meditation, yoga, reading books about spirituality outside of the narrow vision of religion she grew up with, and spending a great deal of time outdoors.

“I think it’s hard for people with anxiety like mine, because you’re constantly rewarded for working harder until
you can’t function anymore. I never understood the danger in it. When you live in a culture where success is rewarded
at all costs, you have to hit a wall for it to change.”

“I think it’s hard for people with anxiety like mine, because you’re constantly rewarded for working harder until you can’t function anymore. I never understood the danger in it. When you live in a culture where success is rewarded at all costs, you have to hit a wall for it to change.”

Littleton hit that wall in an unexpected way after she had allergy tests in August 2019. She’d always known she had allergies but was unaware of the extent to which certain foods would literally threaten her life.

“The first blow was in learning that this thing that I loved so much – food, something I’d really taken joy in, was no longer safe,” she says. The second blow came a day later when she ate something at work without asking about the ingredients (it was avocado). She went into anaphylactic shock, a life-threatening reaction to an allergen that results in a sudden drop in blood pressure and narrowing of the airways, making it hard to breathe. She survived that hospital visit and a few more as she learned which foods could endanger her.

The hypervigilance of her youth returned in spades. “Basically, I just never felt safe,” she says. “I pretty much just stopped eating. I was so afraid that it got to the point where my allergist had me come to her office to eat lunch sometimes.”

She lost 20 pounds, freaked out her parents, who came to visit and help, but it only reinforced her hypervigilance. “It was a really dark time, consumed with anxiety,” she says. “I’d always been the one to say, ‘I’ve got this, I can handle it, I’ll parent myself, I’m good.’ But I wasn’t eating or sleeping. How good can you be? I needed help.”

Her best friend convinced her to talk to her doctor about medication, such a gift in retrospect, she says. “I’d always viewed life’s challenges as ones I should manage on my own; that my successes and failures were built on the framework of my own hard work, pure and simple. My doctor said, ‘no, this is not something you’re failing at. You have generalized anxiety disorder – probably have had your whole life. It’s biological, it’s clinical.’”

She was prescribed the anti-depressant Celexa (Citalopram). “Going on that was like night and day, I felt calmer, more even. The hypervigilance was gone, it was such a blessing,” she says. Together with talk therapy, the medication stopped the incessant “hum” of ‘I’m not good enough’ to allow her to celebrate and embrace the ‘reordering’ of her life. 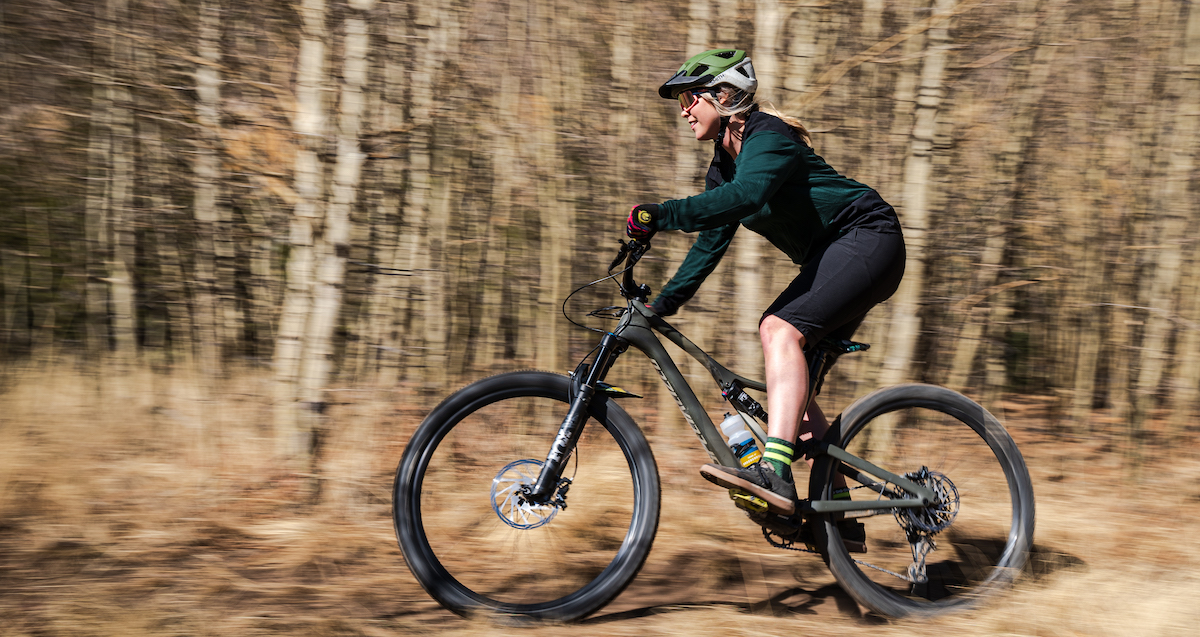 Haley Littleton finds solace when mountain biking on the trails in Summit County.  Littleton shared her journey through anxiety and identity as part of the Face of Hope series, a partnership between Building Hope Summit County and the Summit Daily News.

Five years ago, following Christian high school and Christian college and before graduate school, Littleton spent several months in Amsterdam, where vastness of the world’s ethnicity, spirituality, faith, politics and individual thought were laid before her. “I started to see a whole different world, different ways that people thought and lived, and I realized that there wasn’t just one way to live life or structure your politics,” she begins. “That intensified the deconstruction that began in college of the black and white religion I’d grown up with and my conservatism.”

The deconstruction of her past continued in grad school at the University of Denver where she says, “I really opened my mind and found a bigger world than what I grew up with. I thought, ‘yeah, I don’t know if I believe any of this from my childhood religion (salvation, atonement), and it was the first time I ever had to wrestle with death, because growing up as an Evangelical Christian, death wasn’t scary; sure, you didn’t want it to happen but there was an assurance there.”

Through books she reached for spiritual guides that resonated, and found Father Richard Rohr, a Catholic priest, spiritual author and speaker; and Ram Dass, a spiritual teacher, psychologist and author of the mindfulness book, “Be Here Now.”

Rohr helped her understand the process of growing into an adult. He teaches that order is the first “container;” it’s what you’re taught to believe by your parents and is a natural and safe way to begin life. It’s followed by ‘disorder,’ challenging your beliefs through the vagaries of life, followed by reorder, ultimately finding that place in which you’re comfortable sitting with yourself with all of life’s – and death’s — uncertainties.