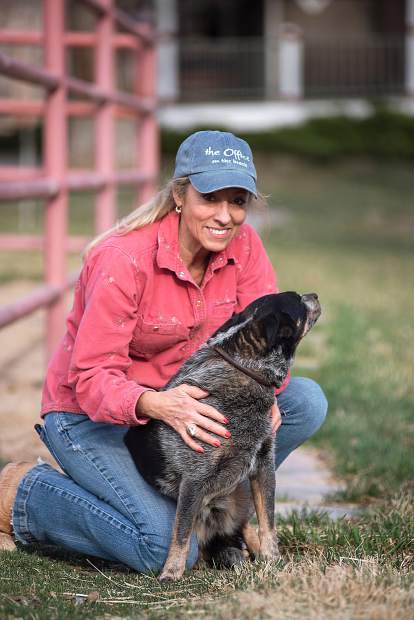 Marilyn Hogan is a dynamic, beautiful, and accomplished professional. She served as the president and CEO of the Colorado Broadcasters Association for over a decade and has spent years on the boards of countless Colorado nonprofit organizations, including The Summit Foundation, The Colorado Mountain College Foundation and the CU Journalism School. She’s been married to her husband for 32 years and has three talented, successful children, two of whom spent much of their childhood ski racing in Summit County. She is part of a close, supportive family: She still regularly visits her 100-year-old grandmother, who lives in Rifle, and has two grandchildren whom she adores.

Few know that Marilyn’s long trajectory of success came on the heels of deep struggle. Prior to moving to Summit County in 1982, she had been a stay-at-home mom living in Woodland Park with her first husband and two sons. After a period in her early twenties of significant family stress that followed the birth of her second son, she experienced a manic episode. She was hospitalized for three days, given a diagnosis of manic depression and medications, and sent home. The diagnosis exacerbated stress in her first marriage and frightened her then-husband, who had relied on Marilyn’s rock-solid stability throughout their marriage. Shortly after, he left the state with her two children, leaving Marilyn without any money and a broken down Jeep. Her father, the chief electrician at Breckenridge Ski Resort at the time, and her mother offered her a place to get back on her feet.

“My dad rescued me,” says Marilyn. “That’s how I ended up in Breckenridge during the absolute most horrible time of my life.”

After landing in Summit County, Marilyn began rebuilding her life. She gained partial custody of her sons, remarried, began her long and successful professional career track, and had another son with her second husband, Marc. And the stress-induced episode of mania she experienced in Woodland Park ended up being a singular event, one that she rarely thought about until some 30 years later. Then at 53, she experienced a number of simultaneous stressful life events while also being hit with powerful hormonal changes related to menopause. The combination sparked her second episode of mania. This time, it took a long time to get the right medications dialed in, and she was hospitalized for two weeks. A couple of years later, she had another period of mania followed by an episode of depression. She was put on several different medications and hospitalized again when the medications didn’t work.

“During that time I was so ill that I couldn’t leave the house, talk to family and friends or even perform the simplest of tasks,” Marilyn said. “I really felt like I was in a form of hell and was scared that I would never be my old self again. I felt so much pain that there were times I would visualize taking my own life, but then I would remember how good life really is and how much I loved my family. I never wanted to hurt them, I just wanted to feel better.”

The hospitalizations, she says, really helped bring her back out of depression.

“It might not have gotten so severe if I would have been on the proper medication earlier, but looking back, I was pretty stubborn and didn’t realize how sick I was,” Marilyn said. “I really believe that a lot of what triggered the severity of what happened to me was a result of hormonal changes. It became more severe with stress and, in trying to cope with that stress, my brain would become very active and shift into over-drive. It took a long time for me to actually realize that I do have this mental illness. It was not until I went through depression that I fully began to understand what happens to my brain.”

THE STIGMA OF DIAGNOSIS

According to the National Institute of Mental Health, Marilyn’s diagnosis of bipolar disorder is shared by an estimated 5.7 million adult Americans, or about 2.6 percent of the U.S. population, each year. The illness comes in varying forms of intensity and is now understood on a spectrum ranging from bipolar I to bipolar III, also called cyclothymic disorder, a milder version defined by numerous periods of milder hypomanic and depressive symptoms consistently outside the normal highs and lows of normal life.

Despite its prevalence, and the fact that prominent entrepreneurs, athletes, actors, journalists, politicians and musicians share the diagnosis, it still carries a stigma for many. Hundreds of public personalities, including Patrick J. Kennedy, Catherine Zeta-Jones, Maria Bello, Kay Redfield Jamieson, have begun to speak openly about their bipolar diagnoses in efforts to reframe public perception of the illness.

Journalist Jane Pauley was working as a co-host of Dateline NBC when she got diagnosed with bipolar disorder. At the time, the doctor suggested she keep her diagnosis a secret and instead tell NBC that she was suffering from a thyroid disorder.

“It was the first and only time I have ever experienced ‘Oh, yes, I’m supposed to feel shame and guilt,’ Pauley told the St. Paul Pioneer Press in 2012 interview. “I got over it instantly.

“We have a new understanding of the brain, even civilians have a new vocabulary — we understand what might happen when there is a chemical or electric switch that malfunctions in a rather complicated set of working parts.” continued Pauley. “Once you think about it like that, you can’t hold on to outdated stereotypes.”

Marilyn’s feelings are similar to Pauley’s: “I have come to terms with my diagnosis and don’t let it affect my self-worth. It’s not any different than other illnesses that can cause a chemical imbalance such as high blood pressure or diabetes. When it’s our brain, it’s a little harder to understand.”

She believes that once people become educated about the disease and take the time to get to know her, they are more accepting. And she feels the worst stigma, the one she suffered her younger years, after her first manic episode, is long over. Still, she sometimes feels hesitant to share it with professional peers.

“Sometimes I do (fear that) people will scrutinize my actions more and possibly look for signs of the illness, especially if I’m being intense, which at times is just part of my personality,” says Marilyn. “I feel confident with who I am and what I have to offer based on past experience. But this confidence had to be rebuilt after the hospitalizations.”

For Marilyn, the rebuilding process came through a combination of medication and treatment. When her depression became quite severe after her mid-life episodes, she received electroconvulsive therapy treatments that she felt were critical in turning the depression around. ECT treatment still carries negative public preconceptions and, according to the National Institute of Mental Health, is a treatment best reserved for severe cases of treatment-resistant depression that haven’t responded to medication or when rapid response is needed. For Marilyn, it proved to be “a miracle,” bringing her back from a barely functioning state to the person she was before experiencing the manic and then her severe depressive episode.

Also critical for Marilyn were her deep faith and the support of family and friends; she believes this support has kept her grounded during the most difficult times of her life, especially knowing that such close connections can be difficult to create in a transient ski community. Even with the support of friends, when one is in the throes of depression, the illness can be deeply isolating.

“My friends reached out, but when I was really sick, I didn’t want to be around anyone,” she says. “It felt really painful and foreign and I absolutely couldn’t help it. I am thankful that I have a loving, accepting husband and children. Without their understanding as we went through some of this journey together, I’m sure it would have been more difficult. I think especially for my older children, there has been more understanding of why I disappeared from their life at one point.”

Marilyn’s life is rich and full now, and looks very different from the dark years she experienced a decade ago. She continues to be deeply engaged in the Summit community. She works at a challenging job she loves as the executive officer with the Summit County Builders Association. She and her husband helped renovate a beautiful old ranch in New Castle where she likes to spend weekends — sometimes with her grandchildren in tow — working on chores, hanging out with her beloved rescue dog, Blue, and riding her horse, a stallion named Mr. Bennett.

The ranch is special, a place that takes her back to her roots growing up on a ranch in Fountain, Colorado, a time when she spent most of her day independently riding her horse to see friends, and life felt safe, carefree and fun.

“Being around the animals, the fruit trees, flowers, working in the garden — all the life the property produces and sustains is invigorating,” she said. And it has been a gift to be around her grandchildren during an age in their lives that she missed out on with her two older sons when they were younger.

“I am now relieved and wouldn’t dream of not taking my medication and practicing stress-relieving techniques,” Marilyn said. “I really feel great and back to my happy, positive, confident self. With the proper combination of medications, exercise, life balance and prayer I feel terrific.”

Her long journey has also given her perspective. “I basically go with the flow more. Not many things that seems like a big deal are really a big deal after you have experienced feeling that you have really lost your life and the sense of who you are. In some ways it all seems a lot easier.”

She encourages those who’ve had mental illness in the past but are doing better now not to take their health and stability for granted, stressing the importance of continuing “those things and behaviors that have made us healthy and brought us back from the darkness.”

As for those still immersed in the darkness, she says: “You might feel that nobody can understand what you’re going through and I believe you are right. Nobody else can really understand what you’re thinking or why you’re behaving a certain way. But I think it’s important to know that you are loved. Loved by God, if no one else, but also, I believe loved by those who at the time are spending time with you and know you the best.

“There is help out there — you just need to ask for help first and truly seek and accept the help that is offered, even if you don’t really understand how you are going to get better. But have the faith that you will.”