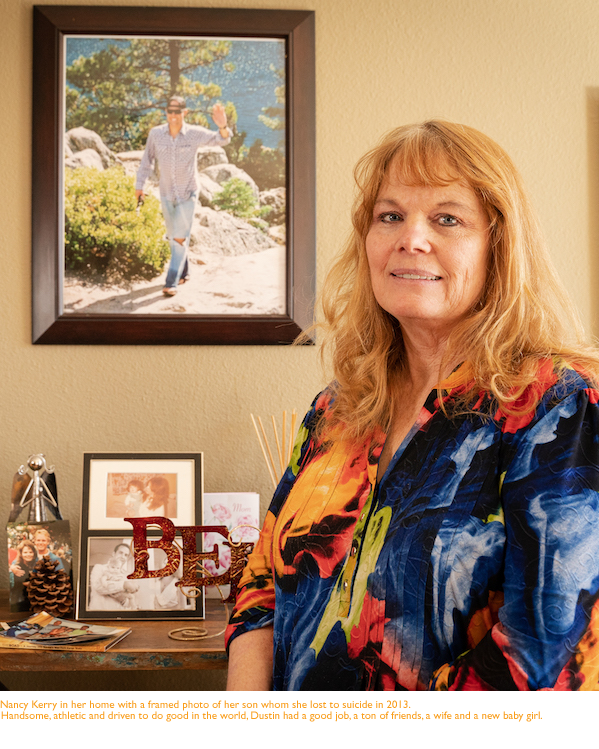 “Okay, I’m going to call it,” I heard the doctor begin to say… looking at all of us surrounding Dustin there in the trauma center. His best friends, his family, all of us, holding onto him. “No!” I pleaded with the doctor as if my pleading could change anything … “Please don’t say it, please don’t, please….” as the doctor called the time of death early in the afternoon on the same day my father had died 15 years before, my son was declared to be, no longer living.

At 34, he was still the most gorgeous hunk of a boy ok, admittedly, a man by then. But to his mom, he was everything. Blue eyes as deep as the ocean he loved so much. His body tanned golden brown from a life spent in the ocean, mostly along the San Diego coast surfing every wave he could find. His kindness was remarkable, beyond compare of many. And, although I’m a biased mom of course, he was known for being the most kind-hearted, generous, giving, and caring soul you would ever know.

Dustin was “that guy.” You know, he had a smile that literally lit up the space around him; he could make you laugh so hard, your belly hurt. When he laughed, you laughed, you just could not help yourself. He remembered everyone’s name, that was important to him. He looked you in the eyes, he listened, he shared his heart, his passions, and you wanted to be around him. You couldn’t wait to hang out with Dustin, and you’d leave your time with him feeling fulfilled, laughing, and loved. He was everyone’s “best friend” because he loved everyone he met.

This video of outtakes of Dustin and his friends from their filming in Asia, is as funny as it is poignant, happy, as it is sad, and shows him as playful as much as he was thoughtful, as goofy as much as he was a leader among others. That is soooo Dustin.

He was extremely compassionate from the time he was a little boy. As a first-grader, his teacher called me into the office to show me how Dustin had erased all of this correct spelling answers because his best friend didn’t have the correct answers and he didn’t want to have a better grade than his bestie. When he was about 10 years old or so, he found people were living in a nearby water gully under a bridge. I came home to find him making an entire loaf of bread into sandwiches and although he did eat a lot, that looked a little unusual. Upon asking, he said he was taking sandwiches to those folks under the bridge, “Mom,” he said, “we have to do something! People are suffering! “And off he went to bring them food.

And so began an entire life in service to others, until his last breath.

Dustin looked for those suffering and those in need. My shelves were often empty of food he’d given to someone. Before long, his bedroom was home to a friend or two. By the time he was a teen, feeding homeless folks in San Diego was a full-time passion; he loved to help out at one mission or another. He became involved with a very active young folks ministry group at church and these kids were often in Mexico building houses or handing out supplies, looking for teens in need, kids needing love, any way he could to show others kindness and love.

In his youthful, “I can save the world,” belief, he and one of his friends started their own non-profit and began raising money to do exactly that, bring more love and kindness to the world. And you know what? They did. Dustin and a friend decided they were going to “backpack through Asia” and bring joy to others in whatever way through could. Honestly, they had no idea what they were doing, no specific plan, but they just got a plane had a round trip ticket and, did it. But, that’s not exactly what happened.

During that trip, Dustin and his friend stumbled across a large number of orphanages in Thailand. The parents of these children had lived in Burma (now Myanmar), which was under a controlled regime and suffering the longest running civil war in the world. The parents, hoping for a better life for their kids, smuggled them into safe territory in Thailand. These parents literally gave their children to others, in the HOPE they would find a better life. The children deeply affected Dustin, he wanted to help them.

Dustin decided he wanted to tell their story of sacrifice and of their hope. So, with passion and purpose, and zero skills in this area, they came back home, got others excited about the idea, bought some filming equipment and off they went… Dustin and friends went back and filmed an amazing story – no experience, no skills, no training? No problem, they had passion, and they had Dustin’s “we can do this, bros” leadership propelling them forward. Believing in his purpose, they finished their film.

It is also Dustin who came to a place so sad, he himself lost all hope and died by suicide on that beautiful spring day in 2013. I often ask myself how can we, as a society, can do more to protect those who struggle with self-doubt so they don’t slip down a path to a point of no-return.

How can we help?

Honestly, I think it is love. To show more love, less judgment, in fact, less everything else. Within love is compassion, empathy, understanding, but the greatest of these…. Right? Is love.

Looking back there were “lots of signs,” but at the time, we didn’t see things the way we do now. I believed he knew how loved he was then (and still is today). I thought he understood how rich in love he was – he had so many friends! He surfed all the time, he lived for the beach and sun. He played the drums so well. He had many opportunities in life in which he excelled. And, as much as Dustin loved others, he was deeply loved in return. Hundreds of people were friends with Dustin. And yet, he believed we’d be “better off,” without him here.

He was wrong. Very, wrong.

People often ask me, “did you know,” “did you see this coming?  My answer is always the same: before he died, I would have told you. “I am afraid for Dustin; I am worried about him.” Yet afterwards, I can tell you, without question, “no, I did not think the bright, silly, funny, gregarious, bigger-than-life, compassionate, humble, soul was actually considering the absolute end of his life. No. I did not believe that as a factual possibility.” I would have done anything to save him, if I could.

He was sad about the usual things at times: broken relationships, careers and jobs, life’s expectations, and disappointment in his mid-30s expecting more of life and himself. I didn’t think he was seriously suffering to the extent he was, obviously.

That said, though, he and I were close. We talked nearly every single day. When he was excited about a new opportunity, I jumped for joy with him and when he suffered a broken heart, so did I, like most parents. We would talk about how life is like the ocean: it ebbs and flows. With it, the sun rises and brightens the day and as it sets, it fills the horizon with a vibrancy of color delighting our senses until it quickly ushers in the night sky.

This is life as I see it: the ebb and flow of life, so much like the ocean. We must hold on in the rough seas and let the sail out when the time is right. Adjusting the sails is a constant work in progress because nothing ever stays the same, thankfully.

Dustin’s death has taught me a few things to share: 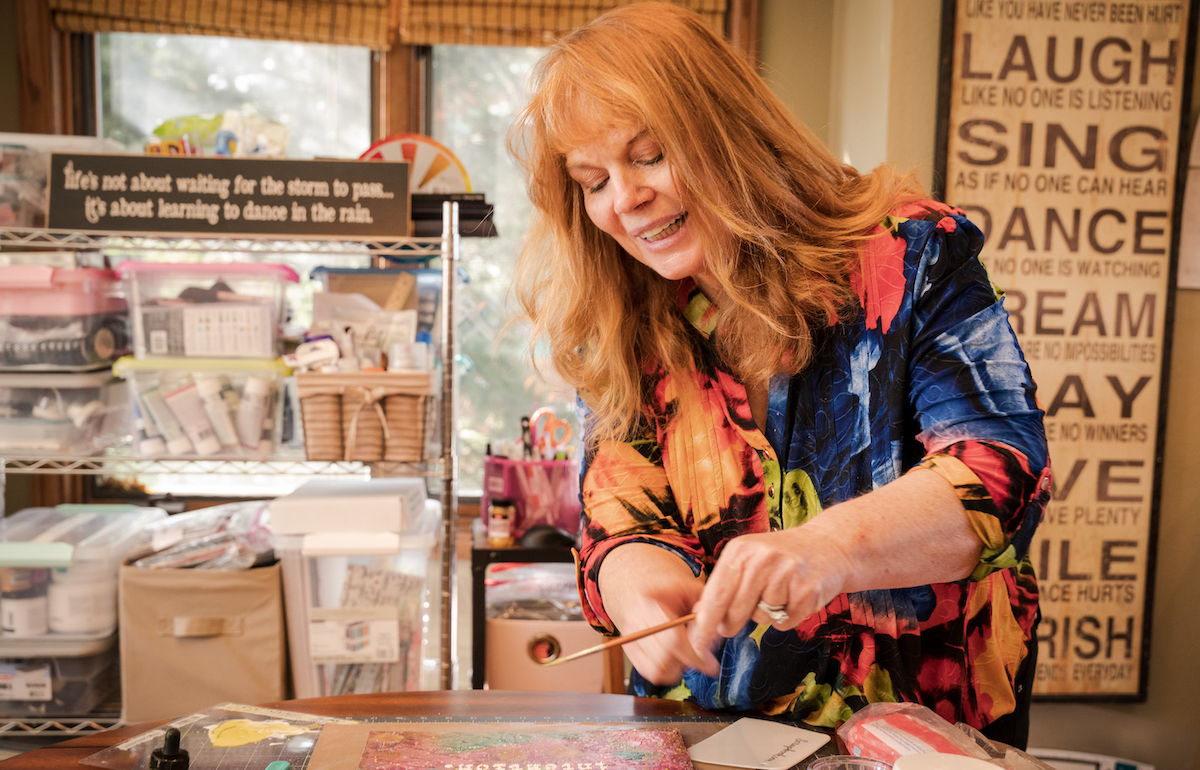 Dustin, in his movie, quoting Anne Frank said, “where there is hope, there is life.” And when he lost all hope, he lost his life. I say to you, hold onto hope. It is a real thing. Take action to breathe hope into others, breathe hope into yourself, believe in it, for hope, is life.

This article, this story, is not what I wanted for my son, of course. I believe he too would have rather found a path to the light of life than not be here. He had no idea how his death would hurt so many people so terribly and it did (and does) – he never wanted to hurt anyone. I know he would not have caused this loss for all of who love him, if he understood the damage it would do. However, it is also my belief we added years to his life as we stood by him in all his struggles, encouraged him, and lifted him up time and again. I am grateful for that, because in the last year of his life he and his wife welcomed what would be his only child, Ireland.

My hope for you, in reading Dustin’s story, is this:

For Dustin, I shall forever spend my life sharing your story of love for others and the lack of love for yourself enough to sustain you through the hard moments. I miss you so much, Dustin. I hope the story of the beautiful life you led and the loss of such promise, will encourage others to take another day, another step, and ask for help. Miss you, Dusty  ~with all of me, Mom